Mergers are governed by the Enterprise Law 2014, under which: “One or several companies (hereinafter referred to as the merged company) may merge with another company (hereinafter referred to as the company). merger) by transferring all of its assets, rights, obligations and legal benefits to the acquiring company and ending the existence of the merged company. ”

According to Clause 3, Article 195 of the 2014 Enterprise Law, if the merged company has a market share of 30% to 50% on the relevant market, its legal representative shall notify the competition authority before proceeding. merger, unless otherwise provided by the Competition Law.

Prohibition of merger of companies in which the acquiring company has a market share of more than 50% in the relevant market, except for the case specified in Article 19 of the 2004 Competition Law is: one or more enterprises The merger is in danger of dissolution or bankruptcy; The merger works to expand exports or contribute to socio-economic development, technical and technological advances. This is to prevent unfair competition, causing bad consequences for the economy. 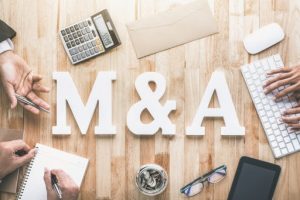 Procedures for merger of enterprises:

Based on Article 195 of the 2014 Enterprise Law, related companies prepare a merger contract and draft merger charter. A merger contract must contain the following principal details:

– Name and head office address of the merging company;

– Name and head office address of the merged company;

– Procedures and conditions for merger;

– Plan of employment of labor;

Dossiers and order of enterprise registration for merger companies include:

– Resolutions and minutes of meetings for ratifying merger contracts of merging companies;

After completing the above procedures, the business registration agency shall update the legal status of the merged company on the National Enterprise Registration Database and make changes to the posted content. sign the business for the merging company.

The merger of businesses can bring a certain economic efficiency, help businesses become stronger but it also ends the existence of the merged companies, so businesses should consider When the company wants to merge, it is necessary to get the highest economic benefit.